50 Years at the Job He Loves

50 Years at the Job He Loves 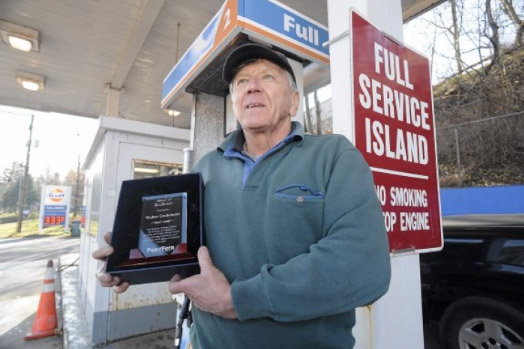 Mark Moran / The Citizens’ Voice Walter Grohowski holds his award for excellence in customer service that was presented to him recently for his 50 years of service at the Pen Fern Gulf Station.

“Hell, no, I’m never going to retire,” said the 68-year-old who is employed as an attendant at the Pen Fern Gulf station on state Route 309 in Kingston Township. “I’m going to drop on the job.”

Despite many changes to the world since Grohowski started working for Pen Fern founder J. Harry May, one thing has remained constant: “Wally truly is the definition of customer service,” said Eric May, Harry May’s grandson.

So much so that Pen Fern is naming an annual award after him, to be given to the employee who best embodies Grohowski’s commitment to customer service.

With his wife of 29 years, Debbie, at his side, Grohowski was recognized for his 50 years of dedication at the May Brands/Pen Fern holiday dinner last week, along with Pen Fern Oil Co. Controller Joe Connors, an employee for more than 35 years, and Dianne Poder, a 19-year employee. Days after suffering a stroke, Connors asked for a laptop to be able to work while in the hospital, determined to be back on the job as soon as possible. Poder canceled her vacation to fill in for him while he was out.

Grohowski grew up in Hanover Township and attended high school there. He started at Harry May’s gasoline station at East Union and North Washington streets, Wilkes-Barre, on Jan. 5, 1962. His friend and mentor was Joe Kane, who worked at the station for 42 years until its 1996 closing.

In the 1960s and 1970s, Grohowski was a mechanic as well as attendant. He remembers five different brands of gas through the years: Calso, Chevron, Texaco, Shell and now, Gulf. He also recalls Eric May and his sister Heather Bower from the time they were children in the back seat of their parents’ car – they now run Pen Fern with their father, Jay May – and likes to joke with them about it.

When the Mays closed the Wilkes-Barre station and moved it to the Back Mountain, many of Grohowski’s customers went with him, Eric May said. Some customers even bring Grohowski lunches and treats, like cheesecake and doughnuts.

“People are all nice to me,” Grohowski said. “And you’ve got to be nice to people.”

Mike Amory’s business, Amory Medical Associates, is in Wilkes-Barre, but he makes a point of going to the Route 309 Pen Fern station – which he does three or four times a week because he does a lot of traveling – specifically because of Grohowski.

“Wally is just an amazing guy,” Amory said. “He greets you with a smile every single time.”

He said Grohowski gets to know people not just as customers but as friends: He asks about their families, shakes their hands, tries to get them to laugh.

“He’s real. He’s genuine,” Amory said. “When you pull into that gas station, Wally makes it all about you. â¦ He made your life better for those few minutes.”

As a business owner, Amory said Grohowski “epitomizes what you would want with your employees and your staff.”

Although full-service gas stations are becoming rarer in Pennsylvania, Amory said Grohowski is part of the reason the Pen Fern station is so successful. He credits the May family, “because for them to have an employee for 50 years, they must be treating their staff the right way.”

The May family realizes they have a gem in Grohowski.

“He glows when he’s out there,” Bower said. “We’re definitely blessed to have him.”

For his part, Grohowski says he loves his job and the Mays.

“They treat me like gold, and I appreciate it every day I work for the family,” he said. “If you have bosses like that, you stay with them.”